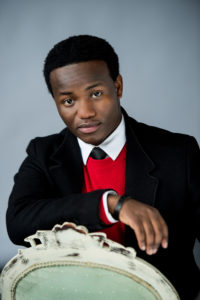 Wilson Kubwayo, MBA is the CEO of Wilson Inspiration, LLC. Wilson works with organizations that want to overcome obstacles so that they can reach their fullest potential.

Originally from Burundi, Wilson grew up in Tanzania and was raised in the refugee camp for ten years. When he was 13 years old, Wilson and his family migrated to the United States.

From academic struggles and failing as a teenager, Wilson used his life experience with poverty and disempowerment as the main reason why he could not succeed. Although Wilson grew up with harsh realities no one wants to face. He later came to realize that he no longer wanted to play a victim role.

Undoubtedly, our past struggles and realities can prevent us from reaching our fullest potential. “If I was born with a better life, I would have been a good person and did more things right.” Wilson calls his previous way of thinking – a mind-virus: a negative way of thinking based on one’s circumstances or negative experiences that has taken place in one’s life. Whether you are a youth, a parent or in a leadership role, you can relate to Wilson’s experience and what he has to share. Wilson draws much of his life lessons and skills from his personal experiences.

Because Wilson suffered in the war as a baby, grew up in an impoverished environment as a teenager, did not believe in himself, and had self-low esteem growing up, It made sense to Wilson why he failed at life and lost hope. Until one day. One event. And one epiphany that changed his outlook on life forever. – Get in touch and bring Wilson to your event!

Wilson is a sought-after inspirational speaker and travels across the country speaking on how to get rid of the mind-virus and overcoming obstacles. He shares his inspiring life story, tips and strategies on success in life, school or workforce. Some of the topics Wilson highly focuses on include, but not limited to, Climbing the Walls of Greatness & Redemption: an inspiring story from a former refugee youth. 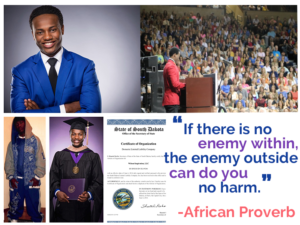 Wilson is a former Director of Community Engagement for USAHello. He is the founder of Our Growth Project, a nonprofit organization that discovers greatness in youth and co-founder of Simple X. As an educator, Wilson is an Adjunct professor at Portland Community College in Oregon.

From an “at-risk” student, Wilson now holds a Masters of Business Administration (MBA) degree with a concentration in Business Innovations and Marketing from the University of Sioux Falls. Wilson was amongst four students in his MBA class to receive the MBA Excellence in Academic Award – a competitive award in academic excellence, integration of ethics, leadership, personal faith, and teamwork. – Wilson was awarded with a medallion that bear the seal of the University.

Attn: Wilson travels out of Portland, Oregon. Serious inquiries only.